“There definitely is a story to every kind of bread we’re making.” The rise of Chad Robertson started long ago, during his studies at culinary school in New York.

It was there he met his wife and co-owner in Tartine Bakery, Elisabeth Prueitt, and also where he got his first taste and smell of what was to become his focus — breads.

While in school, Chad and Elisabeth visited a well-known baker in Western Massachusetts, and he can still vividly remember the smells of wild leaven in Richard Bourdon’s Berkshire Mountain Bakery. As an impressionable 21-year-old, Chad became entranced with Bourdon’s style of baking, his charisma, and his passion. Within hours, Chad knew that he wanted to learn how to make natural leavened breads and that he wanted Bourdon to teach him.

His real education began six months later when he was living with and apprenticing for Bourdon. He learned the principles and techniques that stay with him today. Bourdon shared stories about the chefs who had taught him in Europe, and after a few years with Bourdon and a stint helping a friend open a bakery, Chad left to travel with Elisabeth to learn from those who had taught his teacher.

Chad’s travel would impress Eugene Fodor himself, spending time in Provence and the French Alps learning about super wet doughs that use spring water from the mountains, relying on organic flour, sea salt, and all pure natural leavens, baking in wood-fired ovens. He worked with masters and honed his skill and his philosophy. Slow, gentle mixings. High hydration. Long rises.

Making his way back to the States, he and Elisabeth spent six years in an old farmhouse on the coast of Tomales Bay, 90 minutes north of San Francisco, with a wood-fired oven builder. They exchanged chores for room and board and absorbed all they could, while the builder made them a wood-fired oven of their own.

It is no surprise that Chad and Elisabeth, after making their way back to the Mission in San Francisco, stayed true to their own mission: to employ the techniques of the old French baking masters while infusing a modern approach.

Chad purposefully does not make a lot of bread daily at Tartine, maybe 200-225 loaves between 3p and 5p. The philosophy behind making limited quantities is tied to the process of bread making at Tartine — holding true to older techniques does not give way to modern rapidity. Everything about Chad’s approach has been taken to the point where if there’s one thing that’s slightly off, the bread falls flat. Small batches allow for greater control.

Chad bakes bread every day and unapologetically eats it every day, too. Smiling, he states, “If our bread is the way I want it to be, I am eating it every day out of the oven.”

The Tartine loaf is distinct and Chad wants it that way. With very limited ingredients in each loaf — natural leaven, salt water, flour — he recognizes his time is spent deconstructing these elements to create the DNA of a Tartine loaf. He looks for a contrast between crust and crumb, whether a white bread, whole grain, rye or even baguette. The crust is crispy and crackling and the interior is wild with irregular holes, which to him equates to the care he puts into the fermentation and shaping stages. He wants the bread to come alive so that the loaf explodes with expression when baked, or more technically, has massive oven-spring when baking.

Tartine Bakery is very much a modern-day bakery with customers more than willing to wait 45 minutes for a morning bun and cafe latte. The endless line is a part of the culture and atmosphere. In today’s drive-through, fast-brew-dominated routines, it’s unusual to find such a European style of morning enjoyment. Perhaps the mission that Chad bestows on the fast-paced Mission is to appreciate the patience his influencers instilled in him. The patience that comes with a slow rise. 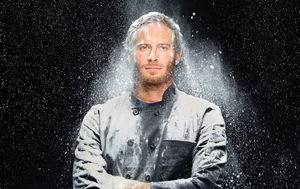 Chef Chad Robertson's journey has spanned West Texas, Western Mass, Southern France, and Northern California to discover, challenge, and immerse himself in the world of baking breads. With a passion for ancient and forgotten grains, he pushes baking boundaries every day. With a new book, Tartine Book No 3 coming out soon, Chad continues to expand his expertise.