“American as apple pie” as the saying goes; if you grew up eating apple pie, you know of its iconic status as a beloved emblem of Americana.
I, however, grew up in a traditional Taiwanese household, and we never had dessert (unless you count an apple as dessert). I was well into my 20s before I tried my first apple pie. It was in my college dining hall, and it wasn’t quite what I expected: mealy apples and chewy crust. Luckily, I eventually tasted wonderful versions that were flaky, juicy, and full of sweet apple flavor — ah that’s what all the fuss was about!

When I worked as a pastry cook at Payard Pâtisserie in NYC, I marveled at the classic French pastries I learned how to bake under Francois Payard. We didn’t make cookies or cupcakes or pies, but instead we proudly showed off elegant French macarons, individual chocolate mousse cakes, glorious fresh fruit tarts. Holiday season at Payard was just another excuse to feature even more ridiculously beautiful pastries. It was at Christmastime that I learned to make pithiviers — puff pastry shells filled with almond cream and decorated to look like a dramatic sunflower. My favorite version had a layer of apple confit on top of the almond cream — apples cooked down slowly in butter, cinnamon, and vanilla until they became tender and silky.

Years later, I opened my own bakery in Boston. When holiday season rolled around I dutifully offered pies of all kinds at Thanksgiving — pumpkin, pecan, chocolate cream, and of course apple. For our Christmas menu, however, I wanted to introduce some of my love of French pastry to our guests. Rather than apple pie, we highlighted apple pithiviers. Slowly over the years, as customers have gotten to know us better, we’ve sold more and more pithiviers, and now they are among our most popular Christmas offerings.

I like to think that there’s a loyal group of Bostonians growing up thinking it’s “American as apple pithivier.”

When I started working at Payard Pâtisserie in New York City, I had already been a pastry chef in Boston for a few years. I couldn’t wait to see what this French guy could teach me. On my first day, I was handed a stack of recipes — all in French — and immediately realized it would be a challenging year.

I spoke and read basic French, but I was pretty hazy on much of the baking vocabulary, and there were many words I’d never even seen before. Pithivier was one of them. I didn’t even know how to pronounce it. (It’s pee-tee-vee-YAY.) “Watch and learn,” Chef Payard told me. He sandwiched a mound of rum-scented almond cream between two large squares of homemade puff pastry and then quickly scalloped the edges of the pastry to look like a sunflower. Slash-slash-slash went his paring knife over the top pastry as he etched sun rays into the surface. The whole thing went into the oven and emerged golden brown with a glorious starburst pattern on top. It put every other pastry I had ever made previously to shame.

At Flour, we give our own spin to the pithivier by omitting the rum and adding a thick layer of caramelized apple butter atop the almond cream. It’s a spectacular dessert. 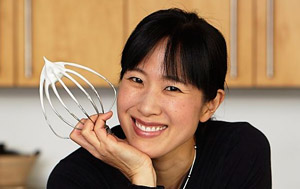 An honors graduate of Harvard College with a degree in Applied Mathematics and Economics, Joanne left a career as a management consultant to enter the world of professional cooking. She opened a Chinese restaurant called Myers and Chang with her husband Christopher Myers in 2007. In 2000 she opened Flour, a bakery and cafe, in Boston's South End, and now there are four Flours in Boston and Cambridge.