Finding parallels between food and music, dinnertime at Chef Dan Kluger’s house celebrates both favorite songs and favorite meatballs.
“Asparagus!” Georgia Kluger yells when I ask her what’s on the dinner menu on a recent Sunday night at her home in Park Slope, Brooklyn.

It’s not often that you find a four-year-old child promoting the green vegetable before the pasta, but Georgia’s affection for good food seems to run in the family. Her older sister, Ella, 77-1/2, tells me about the rest of the menu, including snap peas and meatballs and tomato sauce. Whisk in hand, she is nearly elbow-deep in a large bowl, mixing eggs, breadcrumbs, and a remarkable amount of ricotta cheese together that will make the tender foundation for the meatballs.

Less prodigal and more hereditary, the Kluger girls’ dinnertime enthusiasm is fully informed by their parents. Hannah, their mother, has worked for Danny Meyers’s Union Square Hospitality Group for over a decade. Their father Dan is the Executive Chef of ABC Kitchen, the farm-to-table jewel in Jean-Georges Vongerichten’s crown. Soon after ABC Kitchen opened in March of 2010, the James Beard Foundation gave the restaurant its coveted Award for Best New Restaurant, and in 2012 Food & Wine named Dan one of its Best New Chefs, an esteemed title.

Needless to say, food is very much the foundation of the Kluger family.

Less expected, however, is the Kluger’s love of music. During the late nineties, Dan’s Saturday evenings were regularly spent deejaying at the Belmont Lounge after dinner service. Hannah, who started singing in junior high school, studied musical theatre in college. Music is such a strong thread in their relationship that they tend to tell their stories song-first. Louis Prima was on heavy rotation when they first stared dating. Dave Brubeck gets Dan nostalgic about the records his parents would put on when he was growing up. Nowadays, the Kluger dinnertime playlists are swayed by Ella and Georgia’s preferences, which lean towards Taylor Swift (“more Tay-Tay!” shouts Georgia) and Nicki Minaj.

“Music is part of being human,” declared Oliver Sacks, the noted neurologist and best-selling author, in Musicophilia: Tales of Music and the Brain. Exploring the way our brains react and respond to music, Dr. Sacks extrapolates the fascinating power of composed sounds and how they affect us. Reading through his stories just before watching Dan cook dinner for his family got me comparing the two.

The most obvious comparison between music and food is how the two can both strongly evoke memories.

The inexpressible depth of music, so easy to understand and yet so inexplicable, is due to the fact that it reproduces all the emotions of our innermost being, but entirely without reality and remote from its pain. Oliver Sacks, Musicophilia

In other words, selective memory at its best. It’s the feeling of hearing a song and being sent back to wherever you might have been when you first heard it.

A feeling not unlike the fragrance of a certain spice instantly taking you to your grandmother’s kitchen or biting into a ripe piece of fruit, say a nectarine, and being reminded so vividly of eating a similar one at some other point in some other time.

Both music and food are enjoyed so thoroughly in our senses that I can’t help but believe that the memories of experiencing them live deep within us, making them easily conjured up when all of the beats (or even the beets, pardon the pun) align. Similarly, I don’t think it’s merely coincidence that we refer to this conjuring as tapping into our senses and our memories — it’s a rhythmic encounter. Moreover, we often speak of feeding our senses.

Beyond evoking memories, the further parallels between creating music and cooking food are fascinating. The chef and the composer both use ingredients, whether literal foodstuff or musical notes, in all sorts of combinations in an effort to create harmony. At once artists and craftsmen, these creators see inspiration is just as important as the practice, the repetition of the task over and over until it becomes ingrained and innate. I heard a chef recently refer to his stovetop as his piano, a beautiful analogy not only for the way they both anchor the space they live in, but also how both must be looked after and tuned, recalibrated and wiped down. You must know your instrument and all of its nuances in order to let it play at its best. There is also the humorous, yet very based in reality, rumor that all chefs aspire to be rock stars. There are even posters for chefs.

Perhaps most significantly, food and music are said to have similar healing qualities. Dr. Sacks even used food in his expressive description: “Music can lift us out of depression or move us to tears — it is a remedy, a tonic, orange juice for the ear.” Food, as we are well aware, not only fuels our bodies, but can also comfort, mend, and even transform them. Just as we select what song we’re in the mood to listen to, or the mood we’d like to be in, consuming food helps us transcend whatever state we’re in. At its simplest, it takes us from hungry to full. It can also mark an occasion, help us feel the thrill of a celebration or the sadness of grief. Food is part of birthdays and funerals, first dates and break-ups, too. It indicates something about every single day of our lives.

Watching Dan cook made me feel that these airy ideas have some grounded footing. His movements, even in the relaxed atmosphere of his home, are controlled and disciplined, not unlike a classical musician.

He doesn’t waste movements, pivoting from the chopping board to the stove so efficiently it’s hard to see him even make the move. This kind of positive frugality is apparent in his food, too. For the asparagus and snap peas, both of which are properly cleaned and simply blanched, Dan prepares two condiments. He finely dices the white, crunchy bulb from a head of fennel and submerges it in olive oil with plenty of salt and lemon juice, a sort of fresh, bright relish. The green, feathery fronds from the top of the fennel aren’t tossed aside as they so often, very unfortunately, are. Instead, Dan roughly chops them and combines them with red chili and lemon zest, more olive oil and salt too.

Two completely separate yet entirely cohesive accompaniments, there is a thread through Dan’s simple-but-thoughtful cooking that’s not dissimilar from a song with different verses but a reoccurring chorus.

While Dan finishes the meal, Hannah turns up the music and the girls decide to demonstrate their latest moves from tap dancing class. So happily clicking away to the beat of their favorite pop song, the girls can’t help but grin, Georgia’s toothy smile noticeably missing a tooth. Dinner (including pasta shaped like trumpets) is served, and everyone seems to have seconds of the meatballs. A perfect tune unto themselves, the meatballs are some of the best I’ve ever had. In addition to the ricotta, they include both ground beef and pork, fresh oregano, basil and parsley, plenty of shaved Parmigiano Reggiano, and small cubes of fresh mozzarella. The meal lingers over music and games, including one called “Rose and Thorn” that has everyone listing the best part of their day, the rose, and their least favorite part, the thorn. It’s both reflective and engaging. “Mrs. Spaghetti,” a game that includes memorizing a long series of things that a fictional character eats with her spaghetti, infuses the table with loud laughter.

While the girls help to clean up, Adele comes onto the speakers and Dan pours a bit more wine and talks about when he first started playing the now-very-popular song. “I hear this and it sends me right back to my friend’s house in Montauk a few summers ago. I can picture the exact place and time. I can picture my bare feet on the deck, my girls in the pool, the food on the grill. In the middle of winter when it’s freezing and this song comes on, I feel like summer. I feel like I’m there.” Like a spray of familiar perfume, the music evokes a moment so wonderfully happy that he can’t help but smile while reminiscing, the memory like a song or a meal you hope never ends. 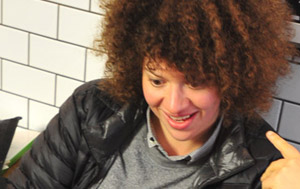 Julia Turshen is a food writer and producer based in Manhattan. Most recently, she co-authored It's All Good with Gwyneth Paltrow.