Now that I’ve scared all of you posers away with that foreboding introduction, I’ll let you in on a little secret: this is ridiculously amazing. Shh! Layers of corn tortilla sopping up spicy, fragrant, red sauce then overstuffed with mushrooms, pinto beans and roasted potatoes. On top is a voluptuous cashew cream that will have you rolling your eyes to the back of your head like a zombie. An enchilada zombie.

This is definitely more of a Sunday night supper, but if you want to enjoy it on a weeknight, it can happen. Make the enchilada sauce the night before and be sure to soak your cashews. Everything will come together in a snap! Although there are four components, I tried to keep them all simple enough so that they work together well and don’t cause too much grief.

* If you’re not feeding an army, you can halve this recipe in an 8 ? 8 casserole. Just make sure it’s a deep one or you’ll have an overflowing enchilada monster on your hands.
* If you want to add extra heat, there are a few ways I can recommend doing it. Sauté a sliced, seeded jalapeño with the onion for the filling, or try an extra jalapeño in the sauce.
* The white sauce is not entirely necessary, but it’s easy enough to do and it looks (and tastes) great. If, however, it’s too much to finagle at the moment or you forgot to soak cashews, then you can just serve topped with some guac. If you wanted to serve with your favorite meltable vegan cheese instead, then I can try to look the other way.
* I love the tenderness of pintos here, but feel free to use black beans! I bet lentils would be yummy, too. But that’s no surprise because I always think lentils would be yummy.

Here’s the order to do everything in to get this done in just over an hour:

For the Enchilada sauce:

Line a large, rimmed baking sheet with parchment paper. Toss the potatoes with the oil right on the baking sheet. Sprinkle with fresh black pepper and salt, and toss to coat. Bake for 15 minutes, reduce the heat to 350°F, flip potatoes and bake for 10 more minutes. Leave oven at 350°F, because that is the temp that the enchiladas need to bake at.

Preheat a 4-quart pot over medium heat. Dry toast the cumin and coriander seeds in the pan for about 2 minutes, stirring frequently, until they’re fragrant and a few shades darker, just be careful not to burn. Add the oil and sauté the onion, jalapeño and garlic with oregano and a pinch of salt for about 5 minutes, until onions are translucent. Add the tomatoes, salt and agave, cover pot, turn the heat up to bring to a slow boil. Let cook for about 20 minutes.

Once cooked, purée until smooth with either an immersion blender or by transferring to a blender or food processor. If using a blender, intermittently lift the lid to let steam escape so that it doesn’t build up and explode and kill you. Also, note that if you use an immersion blender you really have to blend a lot to get the seeds to smooth out. Taste for salt and set aside to cool.

Preheat a large pan over medium heat. Sauté the onion in oil with a pinch of salt for about 5 minutes, until translucent. Add the garlic and sauté just until fragrant, 15 seconds or so. Add the mushrooms and salt, and cook until they’ve released a lot of their moisture, about 5 minutes. Add the pinto beans and lime juice and cook just until heated through, 2 minutes or so.

When the roasted potatoes are ready, toss them into the filling mix. Taste for salt and set aside.

Drain the cashews. Add everything to the blender and purée until completely smooth. It’s rather thick, so definitely scrape down the sides with a rubber spatula often to make sure you get everything. Refrigerate until ready to use.

So we’re just going to be adding layers of sauce, tortillas and filling, then topping it all off. Let’s begin.

Lightly grease a 9 ? 13 casserole pan. Ladle in a thin layer of enchilada sauce, then layer 6 tortillas into the pan. Now things are going to get a bit messy! Ladle in another layer of enchilada sauce (about a cup’s worth), and flip each tortilla to smother in the sauce. Each one should be coated, but you should still be able to see the tortilla, that is to say, it shouldn’t be drowning in the sauce. Next, layer the tortillas so that they’re slightly overlapping and covering the bottom of the pan.

Finally, top with the cashew sauce. I pour it directly out of the blender and try to ribbon it in thick globs over the top. It doesn’t have to be neat, it will look cute pretty much no matter what.

Place in the 350° oven and bake uncovered for about 30 minutes. The topping should be lightly golden.

Remove from oven and sprinkle with a handful of pepitas and chopped fresh cilantro if you like. Now it’s ready to serve!

Photo by Vanessa Rees from Isa Does It 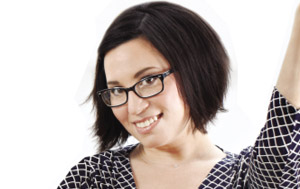 A vegan from Brooklyn? Isa Chandra Moskowitz may have grown up in the land of pizza and bagels with a shmear, but as a teenager, she had a revelation and went vegetarian, then vegan. Isa has now authored seven cookbooks that have sold a combined million copies, and her latest may be her masterpiece.