What started as a weekend of getting drunk, betting on horses, and meeting girls has become a 10 year journey into Southern cuisine and culture. Originally from New York, Chef Edward Lee has embraced Louisville and Louisville has embraced him. Lee understands the rich Southern traditions and incorporates them into his cooking.

And it does not hurt that bourbon is a part of that tradition! Lee takes us to meet Julian Van Winkle of the famed Old Rip Van Winkle, aka Pappy Van Winkle, bourbon and we see where the magic happens at Buffalo Trace distillery. Lee’s cooking brings people together as witnessed at his BBQ and bourbon gathering. Enjoy! 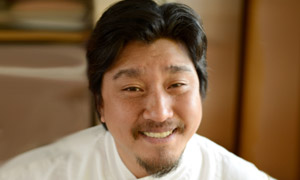 Using his words, Edward Lee is, "One part Southern soul, one part Asian spice, and one part New York attitude". Lee is a Korean-American who grew up in Brooklyn, trained in NYC kitchens, and has spent the better part of a decade honing his vision at 610 Magnolia restaurant in Louisville, KY. He also claims to have never met a bourbon he did not like.