Episode 10: Travel with a Chef, Always

Episode 10: Travel with a Chef, Always

If you want to eat well while you travel, I suggest you take a chef along on your trip — and more specifically, chef April Bloomfield.

My colleagues and I were lucky enough to go back to April’s motherland with her in June, and needless to say, we got to taste some of the best London has to offer, and had many, many laughs along the way.

April cooks Scotch Eggs for Chef Rowley Leigh, the first “real” chef she ever worked for. It was great to watch April cook for and spend time with chefs she really looked up to during her early years as a cook. You could tell she was a bit nervous at times, but she never missed a beat when it came to cooking. It’s in her blood.

If you have worked or ever will work in television production, the most important thing to know is that crew snacks will make or break a shoot. In the case of our London shoot, it was saved by wonderfully “foreign” snacks like Monster Munch (roast beef AND pickled onion flavors).

We got to walk down memory lane with April. She showed us the beautiful walk from her flat to the River Café, where she worked and really grew to love cooking and food.

Here is the beautiful wood-fired oven in the middle of the River Café’s open kitchen. I bet it would make killer pizzas…

I couldn’t resist. But honestly, could you?

We had the privilege of filming Fergus Henderson and April cooking in his flat in London. And just as we imagined, it was warm and smelled great, and the final dish was very, very delicious. 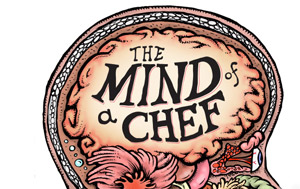