Chef Dave Pasternack of ESCA, in the heart of Broadway, is an amazing exception to the vast array of tourist dives and old school haunts in that part of Manhattan. t’s one of the best fish and shellfish restaurants in the United States, and that’s all due to the genius of Chef Dave Pasternack. He gives a great tip on cooking seafood at home.

This excerpt is from a longer interview between Pasternack and journalist Scott Haas. 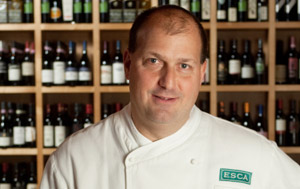 When Chef David Pasternack is not in the kitchen at Esca -- his seafood mecca in New York City -- he can almost always be found fishing. A 2004 James Beard Foundation Best Chef award winner, Dave has been known to bring his own morning catch into the restaurant for service. Dave's cookbook, The Young Man & the Sea, is a testament to this philosophy, with many of the recipes consisting of only three or four ingredients. Most recently, he opened Il Crudo, the fish restaurant at Eataly.