One of the great things about the culinary world we live in today is that so many new tastes are brought to us from other cultures — both by immigrants who move to new places, eager to bring the cooking of their homes with them, and by food pioneers who travel to faraway places and bring back the delicious tastes they find. 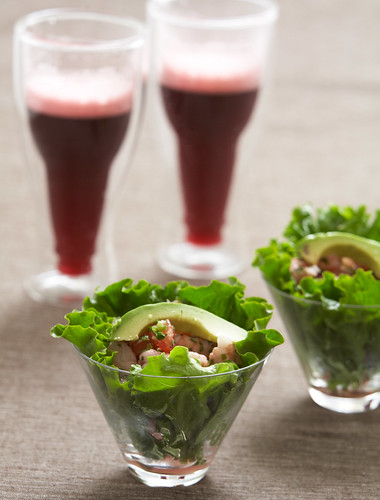 From Peru to you

Ceviche is a traditional South American dish thought to have originated in Peru. The technique of marinating raw seafood in citrus juices essentially “cooks” the fish without the application of heat. Today ceviche is found in many countries throughout Latin America, each of which has its own unique preparation with its own local ingredients.

Mexican and Ecuadoran varieties typically include shrimp, available almost everywhere, and almost all versions include some type of local fish. Ecuadoran ceviche usually incorporates tomatoes, too, which add depth of flavor. We’re going to create a great ceviche that borrows from different cultures.

I first enjoyed ceviche in East Boston, Massachusetts, an area heavily influenced by Latin American culture. The Ecuadoran variety I sampled there was made with locally caught striped bass, the meat of which has a great balance of flavor and texture.

You can use any fish native to your region. However, avoid using very heavy, oily fish like salmon — its huge flavor and high oil content will overwhelm the other flavors of the dish.

Ceviche pairs excellently with many different beers. For a fun, fruity pairing, try matching it up with a fruit lambic like Lindemans Framboise. The ceviche’s oceanic and herby flavors match nicely with the strong fruit of the lambic, and they share a tanginess that is fresh and inspiring.

Lindemans Framboise is brewed in a quiet Belgian town, southwest of Brussels, called Vlezenbeek. Commercial brewing of Lindemans began in 1811, though the Lindemans family has been brewing beer for centuries.

Their framboise is made in the traditional style of lambics — wild-fermented from the yeast native to the Senne River valley. With its cherry trees and numerous small farms growing hops, barley, and wheat in a mild climate, the region has enjoyed an incredible population of wild yeasts that has been seeding breweries for hundreds of years.