My life has basically been a bridge between two cultures. Both parents were born in Beijing, met in the U.S. and became first-generation immigrants. We settled in the heartland of the U.S. in Dayton, Ohio. As is Chinese custom, food was at the center of our household. It was always in abundance, always shared with others, and always eaten together as a family. No meal was ever finished without a specific plan on what and where we would be eating next.

Incredibly, both my parents and grandparents knew how to cook. They shared with me the ingredients, recipes, and traditional techniques that form the foundation of classic Chinese cooking. I soon found myself working alongside my mother and father at Mandarin Kitchen, the family-owned restaurant in town.It’s hard to believe, but cooking was not my immediate career path. Following along a Tsai family legacy, I went to Yale for an engineering degree. It was during those summers, however, when I first traveled to Paris, I became convinced to think otherwise. Intrigued by French dessert and bread making, unlike anything I had seen before, I enrolled at the Cordon Bleu and trained under Master Pastry Chef Pierre Herme. After that, I worked as a sous chef at Natacha, a local restaurant in Paris. It was amazing to learn a whole new set of cooking traditions, equally disciplined and respected as those from my childhood. I soon began to visualize what delicious results could be achieved by the combination of these two cuisines.

Setting the stage for East-West

It first begins with a respect of the culture’s unique ingredients and techniques. Fusion is a word mistakenly used in this area. To me, that sounds more like something that is unnaturally forced together (and often times, the resulting off-flavors suggest that they were). East-West cooking is about finding the right, harmonious way to combine two distinct culinary approaches. It delivers food that should excite diners through the balance of flavors, contrasting ingredient textures, colors, and temperatures. One example of this is my Foie Gras-Shiitake Shumai with Sauterne-Shallot broth served at Blue Ginger. In France, foie gras is classically paired with a Sauterne wine. The new dish preserves the Western flavor combination yet repurposes it in a new Eastern form (dumpling in broth) and adds complementary Eastern ingredients like shiitakes. It’s not just new. In my mind, it’s better.— Recipe: Foie Gras-Shiitake Shumai with Sauterne-Shallot Broth

Over the years, I have experienced how the power of East-West thinking extends much more broadly than the dishes in my restaurants. And as equally important, it’s still about finding a harmonious balance. There’s incredible strength in taking the best of Eastern and Western sensibilities and applying them to how you can live your life.To me, there are the three cornerstones that represent the East-West living philosophy. The number is a conscious choice since the number 3 sounds similar to the character for birth and is considered a lucky number. The number 3 is significant since there are three important stages in a person’s life (birth, marriage, and death).

I was raised on an Eastern style diet — vegetables are king and make up the largest portion on the plate. Next come grains with meat/proteins trailing last. Today, with obesity in the West becoming a problem, researchers are realizing the nutritional benefits of vegetable-focused Eastern cooking. It’s about eating what you want, but in a smart, conscious way.— Recipe: Chicken and Tri-Bell Pepper Chow Mein

I also have the pleasure of working with Lilian Cheung, the Director of Health Promotion and Communication at the Harvard School of Public Health. She recently published a book entitled Savor: Mindful eating, mindful life. She outlines a nutritional and spiritual seven-step approach to improve your diet. It beautifully combines the best of Eastern philosophies with those of Western science. You basically learn to develop a closer connection to the food you eat, versus today’s uninvolved “grab and go” mentality. She highlights areas that involve honoring your food (to understand its origins) as well as engaging all your senses with every bite (to have your body/mind present to what you are doing). The concept is really pretty simple. If you can slow down the rate at which you eat, your body will be better able to gauge when it is full/satisfied and you will actually consume less.

I enjoy a good hard workout. But Western exercise is somewhat limited. What I mean is that it primarily focuses more on the external/outward benefit of being healthy, e.g., winning, measureable performance, and overall appearance.In my mind, an East-West approach is more balanced by adding a key internal perspective. It’s more than how we look. It involves the context of how we feel. Eastern exercise also combines rest/relaxation along with exertion to provide a healthy yin/yang aspect to the experience. How that manifests for me is that in addition to squash and golf, yoga also plays a key component to my workout/fitness regimen. It delivers a much-appreciated sense of balance, calm, and peacefulness. (Some say golf is supposed to also provide a balanced approach to fitness and exertion. I have to admit that on some days, however, for me that is furthest from the truth!) Another aspect of an East-West approach to health is harnessing the power of positive energy. Eastern philosophy sees interconnectedness among all the events in the universe. Tapping into that through meditation, energy healing, and even feng shui serves as a great compliment to conventional Western thought.

As mentioned above, Eastern thinking is grounded in the notion that all humans are connected. The greater whole therefore benefits from an inherent social obligation to help and serve others. To paraphrase the honorable poet Maya Angelo, every day you should ask yourself, how do I serve?In a world that tends to reward individual achievement, finding a way to give back to others again provides that East-West balance. We can proudly engage our Western drive/success and apply it to something that can make a larger, more collective difference. I am a firm believer I was not put on the planet for me, but for everyone else. I teach the same things to my boys. I encourage them to individually find their special “mark.” It’s really about karma. I’m reminded of what my grandfather often used to say to me. “Hao-ren hao-bao.” When translated, it means “Good things happen to good people.” 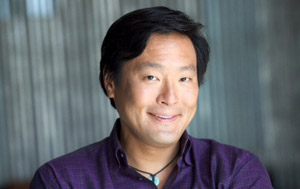 Ming Tsai is the James Beard Award-winning chef/owner of Blue Ginger and the Asian Gastropub Blue Dragon. An Emmy Award-winner, Ming is also the host and executive producer of PBS-TV's Simply Ming, now in its eleventh season.