While San Diego is one of the few destination spots for Mexican food in our great country, there is no other dish that locals would pride themselves on more than the perfect fish taco. In fact, according to fish taco legend, Ralph Rubio, after experiencing fish tacos on a trip to Mexico, set up shop in 1983 specifically to introduce San Diego to the dish.

Of course, the fish taco has a much richer and deeper history than the past 27 years. The fish taco seems to have appeared first in small fishing towns in Mexico. As far back as the 1500s, the local fishermen would take their fresh catch, wrap it in a thick, home-ground corn tortilla, and dig in.

In our modern times, Ensenada, Mexico touts itself as being the origination of the fish taco as we know it — fried or grilled, wrapped in a warm tortilla, and possibly topped with some cabbage and salsa. Simple ingredients are used so that the fish can take center stage, showing off its fresh flavors, as it was typically caught just hours before being served.

It didn’t take long before the fish taco was brought the short distance over the border and into San Diego. Our city is well known for its laid-back surfer dude attitude, and the fish taco is a perfect complement to that lifestyle. While our great city has grown in size as well as industry over the last 30 years, the fish taco remains a staple for our diet, with almost every restaurant and eatery offering its take on this special dish. 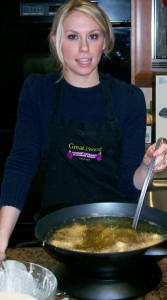 A finger on the pulse of San Diego

At Great News! Discount Cookware and Cooking School there is no shortage of opinions about the taco. Our store and cooking school staff take great pride in offering up buzz-worthy chefs, personal chefs, and the hottest restaurateurs to our students. With our finger on the pulse of the city, we are able to gain insight into the best places to experience fish tacos. But experiencing the ultimate fish taco is quite subjective.

I have ventured out into the city’s most popular venues; spent quality time in my kitchen, forcing friends and husband to eat endless tacos; and sampled a home-chef’s personal best. As a San Diegan who has quite a love affair with our local dish, I approached the task of finding the perfect recipe with ferocity and excitement.

It was my job to eat my favorite food at some of the best places the city has to offer. I am sure not only that Great News! is bringing you a gem of a recipe, but that you will rave at its deliciousness, as well. I am also almost positive that I need a break from the tacos … for now.

My first tasting happened as if designed by the gods. A family member of mine, Davo, just happens to be the best home chef that I know. My husband and I were invited over for a small family dinner of — yes, you guessed it — fish tacos. Boy did he deliver the goods. The recipe was unique yet traditional in preparation.

The fish was a flaky, light, crisp beer batter, and the tortillas were crisp and not crunchy. This was the best taco I had ever had in my life. I wondered how this man was a member of my family and yet I’d had no clue these tacos were in his arsenal. When I asked him about it, he said this was his best kept secret. He only makes them a couple of times a year as a treat for those of us privileged enough to secure an invite.

I kept looking, and nothing beat Davo’s

After I’d eaten three tacos and a handful of chips served with homemade guacamole and pico de gallo, my husband rolled me into the car while I decided this taco would set the bar for my adventure. But could there be a better fish taco in San Diego?

For me, the answer is no. After two months of investigation, after countless dollars spent on Taco Tuesday, swanky restaurants, and the fast food legend, Rubio’s, my first taco reigned supreme, as Alton Brown would say. My hope is that you will download the following recipe today, prepare it at home, and bask in its glory.