Narrative to a Daniel Patterson Recipe

Narrative to a Daniel Patterson Recipe

Every recipe tells a story and that is certainly true of Daniel Patterson’s recipes in his new book Coi: Stories and Recipes. This is the story of how the Prather Ranch Beef Encrusted in Lichen came to be.

I was always a sensitive kid, highly aware of my surroundings. Some of it was my nature and some was my home environment, which trained me to pay attention to the littlest details, to subtle shifts in energy and circumstance.

As I grew into a cook, and later a chef, that hyper-sensitivity translated into an intense focus on the smallest things. I see wisps of dust on a baseboard, a corner of an herb a millimeter out of place, the barest suggestion of fraying edges on a mushroom as if they were under a microscope. Sometimes I forget that other people don’t see the world with an intensity born of self-preservation rather than pleasure.

Foraging, like cooking, rewards that kind of obsessiveness. When we opened I incorporated only a few wild plants on the menu. As I learned more about the local ecosystem, that number increased, and eventually I was going out every morning, often to the same places, year after year. I saw the life cycles of the plants, from tiny sprouts to flowers, how their taste and texture changed over time and the moments when they were the most delicious. I grew to understand the seasons and micro-seasons instinctively, developing a degree of intimacy with the plants and where they grew that is hard to explain. I always felt that some part of that emotional connection made its way into the food.

There is an incredible amount of flavor variation among wild plants. My favorite California bay tree has an exhilarating, penetrating eucalyptus/menthol aroma, but the tree twenty feet away has gamy, cat pissy notes that make its flavor totally different (and for me, unusable). That awareness is everything about how I cook. It’s also how this dish came to be.

I was in a photo shoot in a forest. For some reason, the photographer wanted me to hold branches covered with lichen, in spite of the fact that I insisted that they were not one of our cooking ingredients. That’s just how these things go sometimes. I smiled a lot, and eventually, because I tend to eat everything I get my hands on, I popped a piece of the lichen in my mouth. I chewed.

It tasted like nothing at first, but gradually the flavor came out, mushroomy and earthy and interesting like a mouthful of forest.

I’d just been to an event where I’d learned to boil lichens, so I cleaned and boiled them in several changes of water, until they gave up their bitterness. I dehydrated the cooked lichens, and ground them into a powder, which tasted like a cross between black trumpet mushrooms and black truffles. I covered the outside of a piece of beef in the powder, wrapped it into a neat little cylinder and then cooked it in a low oven until it was pink and juicy. The flavor of the lichen fused with the beef in an incredible way, bringing out deep, aged notes in the meat.

From there the dish fell into place naturally. It’s a dish of tradition, although it doesn’t seem like it at first glance. It is based on a classic boeuf bordelaise: beef with marrow sauce, spinach, and mushrooms. Except the spinach is a wild coastal spinach, the predominant mushroom flavor comes from lichen, and the bordelaise sauce is the weirdest iteration you’ve ever tasted, infused with native forest spices and pumped full of acidity, so it looks dark but tastes green and fresh and bright.
We only cook with grass-fed beef. Beyond the ethical and environmental reasons, I prefer the flavor. Cows that are fattened on corn and grains can be delicious, but they do not reflect the taste of the place where they were raised. Since we opened we have used beef from Prather Ranch. Their animals graze on cool, lush Sierra-Nevada mountain fields in the summer, and Sacramento Delta pasture in the winter. Prather is a small, closed-herd ranch that can trace their roots to the nineteenth century. They grow their own hay, breed from within their own herds and, most unusually, operate their own slaughterhouse, where they process the animals. They control every aspect of the operation.

The care they take in raising animals shows in the flavor. Prather dry-ages the meat, and the taste is intensely beefy and direct, the way beef used to taste before feedlots were invented. I have found the flavor to be particularly accommodating to wild plants. This dish is evocative of the forests near the coastlines, and the meat a platform on which those flavors are expressed. 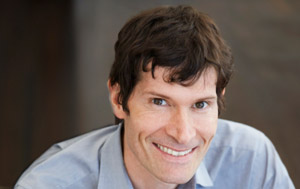