“Messy eggs”  with rough-cut potatoes huevos rotos vascos. This is a typical way of serving fried eggs, the Basque equivalent of what in diner parlance would be “two eggs sunny-side up over fries, wreck em!” Much fuss is often made over the best way to cook French fries, but Basque fries are their own thing. They are golden and crispy on the outside, extremely tender on the inside, and more shards than sticks. The best are boiled first and then fried in olive oil. My grandmother Victoria made them this way, too, so eating fries in the Basque Country carries a remarkable nostalgia for me. As I eat them, I always remember how the two of us would fry potatoes and then eggs from her hens and eat them together as a late-night snack.

Find this recipe and more in The Basque Book. 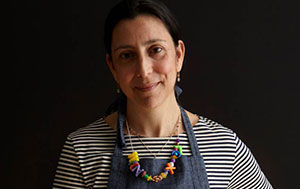 ALEXANDRA RAIJ and EDER MONTERO opened El Quinto Pino in 2007 followed by Txikito, New York's only Basque restaurant, in 2008. In 2012, they expanded to Brooklyn with La Vara, a restaurant whose dishes express the intersection of the Moorish, Jewish, and Christian foodways in Spain. REBECCA FLINT MARX is a senior editor at San Francisco Magazine and the winner of the 2013 IACP Bert Greene Award for Culinary Memoir for her essay "From Sex Cake to Spurned Salad."