On this episode of Chef’s Table, James Beard award-winning journalist, Scott Haas, sits with Andrew Carmellini at The Dutch in New York City.

Andrew Carmellini worked for many years under Daniel Boulud, one of the world’s greatest chefs and protectors of French food. Andrew learned how to cook exquisite classics from various regions of France. He was taught how to manage a restaurant. He ran Cafe Boulud. Independent now for less than ten years, he decided to be himself.

French food is delicious, but what about the importance to Andrew of growing up in an Italian-American household in South Cleveland? Shouldn’t his upbringing find a place in his food? With Locanda Verde, in New York’s Tribeca, Andrew is cooking beautiful Italian-American food. At The Dutch, the food is American: Pot pies, fruit pies, and barrio tripe. His talent is such a deep expression of his thinking about food that no matter what he does, the passion and skill are evident.

Now Andrew Carmellini sits down with us on Chef’s Table. 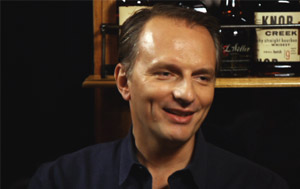 Chef, restaurateur and American travel authority currently living and working in New York City. Currently, Carmellini is the chef and partner at Locanda Verde and The Dutch.